Insight into the Laws of Nature for Biological Evolution

View Insight into the Laws of Nature for Biological Evolution 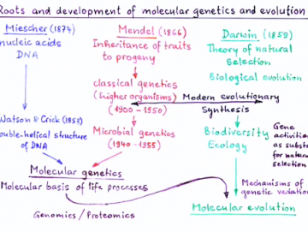 Both evolutionary biology and genetics have their roots 150 years ago in work with phenotypic variants of plants and animals. In contrast, microbial genetics originating as recently as the 1940s, rapidly revealed that filamentous DNA molecules are the carriers of genetic information. We will discuss further steps in the exploration of structure, functions and evolution of genetic determinants, in particular of bacteria and bacterial viruses. These studies revealed a multitude of specific molecular mechanisms contributing to the spontaneous production of genetic variants. These specific molecular mechanisms can be assigned to three natural strategies of genetic variation with qualitatively different contributions to biological evolution: (1) Local nucleotide sequence alterations can contribute to step-wise improvement of a particular function; (2) segment-wise DNA rearrangements can lead to improvement of available capacities; (3) DNA acquisition by horizontal gene transfer can be viewed as sharing successful developments made by others. These processes are the drivers of biological evolution and they employ enzymatic activities of so-called evolution genes acting as variation generators and as modulators of the frequency of genetic variation, together with a number of non-genetic elements. On the basis of acquired knowledge on the slow, but steady progress of biological evolution, we can conclude that natural reality takes active care of biological evolution. Increasing evidence indicates that this process of self-organization applies to all kinds of living organisms. Aspects of worldview related to our conclusions will be discussed, as well as impacts on biotechnological applications.