The World of Spintronics: Electrons, Spins, Computers and Telephones

View The World of Spintronics: Electrons, Spins, Computers and Telephones 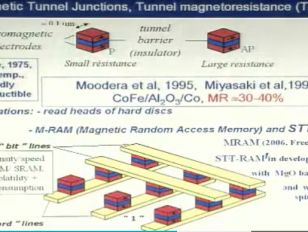 Spintronics is a new field of research which exploits the influence of the electron spin on electronic transport. It is well known for the giant magnetoresistance of the magnetic multilayers and its application to increase the capacity of the hard discs, but it has also revealed many other interesting effects. In my talk I will review some of the most promising directions of today, which will includes the study of the spin transfer phenomena, spintronics with semiconductors and molecular spintronics. In a spin transfer experiment, for example, one manipulates the orientation of a nanomagnet by transfusing spin angular momentum into it from a spin-polarized electronic current. This electronic spin transfusion can be used to switch the magnetization (with near applications to the writing of magnetic memories) or to generates oscillations in the radio-wave frequency range (with promising applications in telecommunications). Spintronics with semiconductors aims to some fusion between conventional electronics and spintronics, while molecular spintronics turns out to be a possible way to go ñbeyond CMOSî, that is beyond the silicon electronics of today.