What About Redefining Time Using a Stable Laser?

View What About Redefining Time Using a Stable Laser? 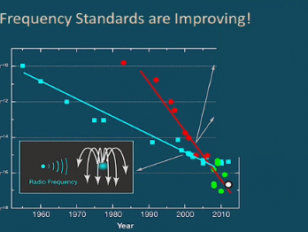 Several laser-based Atomic Clocks now have an accuracy potential of ~2 x10-18, a hundred-fold better than the best achieved after more than 60 years’ experience with rf resonances in Cs atoms. Still, this long attention span documents that the Cs Fountain Atomic Clock has certainly been mankind’s best measurement reference. Moving to a new international standard will bring interesting scientific, technical, and political issues. For example, the new clock’s potential accuracy will be destroyed if we are slightly wrong about the local gravity at the site, corresponding to an inch of vertical error above the earth’s center – at these new precision scales, even the Red Shift of General Relativity is a big deal! How will we intercompare the various future national reference standards? A third delicate issue is choosing just which of the several now-operating systems will be chosen as the new STANDARD. In the analogous redefinition of the International Metre in 1982-3, John Hall was one of the two US experts when the Speed of Light became a defined quantity (c = 299 792 458 ±0 m/s).