What is Quantum Optics?

View What is Quantum Optics? 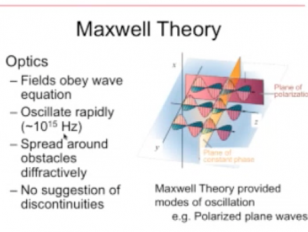 The image of light waves as oscillating electromagnetic fields explains virtually all the phenomena of traditional optics.  An awareness that these waves are somehow subdivided into quanta has however been with us since the early 20th century.  The naive effort to view light quanta as ordinary particles led quickly to a succession of contradictions and paradoxes that could only be resolved by the development of the broader theory of the wave-mechanical behavior of all varieties of particles.  The application of the same principles to electromagnetic theory led to the development of the subject now called quantum electrodynamics.  It is an enormously versatile theory, which comprehends a vast range of Interesting and occasionally strange ways in which light quanta can behave.  We shall discuss some of these behaviors, noting that they are now seen as common to fields oscillating at all frequencies from radio waves to gamma rays.  A recent development has been the use of standing-wave beams of light to bind atoms in loose lattice structures that resemble crystals but are remarkably adjustable in their properties.  A more richly detailed science of optics is now emerging from the more explicit study of quanta and their behavior.