The Ubiquitin Proteolytic System as a Novel Drug Development Platform 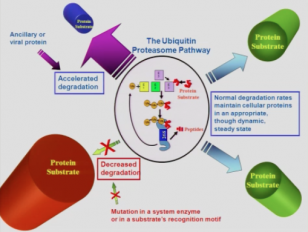 Between the 50s and 80s, most studies in biomedicine focused on the central dogma – the translation of the information coded by DNA to RNA and proteins.  Protein degradation was a neglected area, considered to be a non-specific, dead-end process.  While it was known that proteins do turn over, the high specificity of the process – where distinct proteins are degraded only at certain time points, or when they are not needed any more, or following denaturation/misfolding when their normal and active counterparts are spared – was not appreciated.  The discovery of the lysosome by Christian de Duve did not significantly change this view, as it was clear that this organelle is involved mostly in the degradation of extracellular proteins, and their proteases cannot be substrate-specific.  The discovery of the complex cascade of the ubiquitin solved the enigma.  It is clear now that degradation of cellular proteins is a highly complex, temporally controlled, and tightly regulated process that plays major roles in a variety of basic cellular processes such as cell cycle and differentiation, communication of the cell with the extracellular environment and maintenance of the cellular quality control.  With the multitude of substrates targeted and the myriad processes involved, it is not surprising that aberrations in the pathway have been implicated in the pathogenesis of many diseases, certain malignancies and neurodegeneration among them, and that the system has become a major platform for drug targeting.

Drug Development in the 21st Century – Are We Going to Cure All Diseases?
Lectures
1351 views