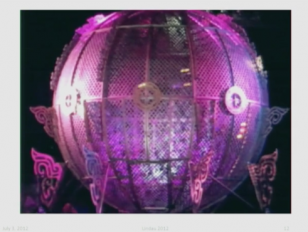 How can one advance a working hypothesis that will not be wrong tomorrow and ridiculous the day after? Beyond the Standard Model we find uncertainty and confusion, with both unclarity as to which might be the correct theory, as well as little in the way of connections between theory and experiment.  But, even in less exotic contexts, issues such as non-locality and entanglement, and the role of the observer, point to the existence of something not, as yet, clearly understood.  The missing factor, it will be suggested, is the process of ‘observer-participancy’, or more simply agency, that Wheeler hypothesised might ‘[suffice] to build everything’.  Wheeler’s hypothesis was an intuitive leap based on the idea that an elementary quantum observation to some degree imposes a corresponding form on reality but this, from the present perspective, misses the point.  Minds more generally impose form on reality, suggesting that in quantum observation we see some kind of mind at work.  It is then logical to suggest that whereas mind or agency is involved in processes such as particle detection in some limited form, a less limited form might be involved in more dramatic manifestations of reality, such as our universe.  Wheeler did not make such a suggestion explicitly, though he may well have had it in his mind.  It was wise for him to use unemotional terminology such as observer-participancy, rather than some term such as an agency which might arouse ‘attack dogs’ (as has happened to those who have proposed this kind of ideas using terms such as agency or intelligence).  But to rule out ideas a priori is unscientific.  What was missing from Wheeler’s analysis was a clear understanding of what is involved in being a subject.  This belongs more to the field of study known as cognitive science, from which it follows that cognitive models represent the direction from which Wheeler’s ideas should be approached in order to develop them further.  Networks that evolve to optimise their collective functioning, including especially the development of inter-system cooperation, appear to have a crucial role to play.  We hypothesise that ‘the real M-theory’ involves networks functioning as minds, with both quantum mechanics and space-time geometry emerging as the behaviour of systems of this kind in particular situations, rather than being fundamental.  Models based on such principles should reveal the extent to which such a picture is valid.

Which Way For Physics?
Lectures
717 views

The Adventure of Cold Atoms. From Optical Pumping to Quantum Gases
Lectures
813 views