The Development of Particle Physics

View The Development of Particle Physics 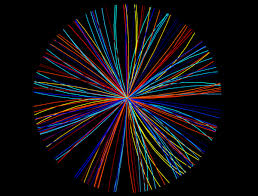 Particle physics mainly developed after World War II. It has its roots in the first half of the previous century, when it became clear that all matter is made up from atoms, and the atoms in turn were found to contain a nucleus surrounded by electrons. The nuclei were found to be bound states of neutrons and protons, and together with the idea of the photon (introduced by Einstein in 1905) all could be understood in terms of a few particles, namely neutrons, protons, electrons and photons. That was the situation just before WW II.__During WW II and directly thereafter information on the particle structure of the Universe came mainly through the investigation of Cosmic rays. These Cosmic rays were discovered by Wulf (1909) through measurements on the top of the Eiffel tower and Hess (1911) through balloon flights. It took a long time before the nature of these cosmic rays became clear; just after WWII a new particle was discovered by Conversi, Piccioni and Pancini. This particle had a mass of 105.65 MeV (compare the mass of the electron, 0.511 MeV and the mass of the proton, 938.272 MeV). The development of photographic emulsions led in 1947 to the discovery of another particle, the charged pion (mass 139.57 MeV), by Perkins. In subsequent years yet more particles were discovered, notably the K-mesons and the “strange baryons” such as the Lambda (mass 1115,683 MeV). Gradually the phenomenology of all these particles developed, new quantum numbers were invented and classification schemes developed. At the same time, the development of new devices and methods greatly furthered the knowledge of elementary particles. The most important of these are the particle accelerators, the cyclotron and developments thereof, and the detection instruments such as bubble chamber and spark chamber.__In the beginning sixties Gell-Mann and Zweig came up with the idea of elementary constituents called quarks. These quarks did have unusual properties, the main one being that they did have non-integer charge, in contrast to all particles known at the time that did have integer charge (such as the electron and muon with a charge of -1). For this reason the quarks were not immediately accepted by the community. In addition, as we know now, they can only occur in certain bound states such that the charge of these bound states is integer. Thus the quarks by themselves are confined to bound states. The reason for this confinement became clear much later, around 1972.__The theory of the forces seen to be active between these particles is quantum field theory (QFT), a theory of such complexity that its development stretched over many years. Around 1930 Dirac, Heisenberg and Pauli formulated the foundations of QFT, but it was soon discovered that the theory as known then was very defective, giving rise to infinite answers to well defined physical processes. Fermi was the first to apply QFT to weak interactions, notably neutron decay. The theory developed by Fermi was a perturbation theory, with answers given in terms of a power series development with respect to some small constant, the coupling constant. The lowest order approximation of Fermi’s theory was quite successful, but any attempt to go beyond the lowest order met with failure. In any case, Fermi’s theory involving the then hypothetical neutrino postulated by Pauli, was successful enough to cement acceptance of that particle.__ A breakthrough was due to Kramers, who already before WW II discovered that QFT implied certain corrections to the atomic spectra. Experiments by Lamb actually measured such corrections (Lamb shift), and Kramers ideas found acceptance by the community. In addition, Kramers introduced the idea of renormalization, a procedure whereby the infinities of QFT were localized, and where outside these isolated parts perfectly precise calculations could be done. Feynman, Schwinger and others took up these ideas and developed the QFT of electromagnetic interactions, allowing very precise calculations of the Lamb shift and other corrections, commonly called today radiative corrections. These developments, including very successful experimental confirmations, took place around 1948.__The development of QFT of the weak interactions was very difficult and lasted till about 1971. A new idea, the interplay of forces arranged in a very careful manner such as to avoid the occurrence of infinities, was developed. This is known under the name of gauge theories. In such a theory there is a multitude of forces and particles such that all irreparable bad features cancel out. Thus the theory thereby predicted the existence of certain new particles, necessary to complete the complex structure of balancing infinities. The actual discovery of these particles, notably the Z0 and the charmed quark, topped by the discovery of the top quark in 1995, has firmly established the gauge theory of weak interactions.__The strong interactions, the forces responsible for the interactions between quarks and notably supposedly responsible for quark confinement, profited from the development of gauge theories. In the wake of the gauge theory of weak interactions also a gauge theory of strong interactions was formulated and investigated. An important step was taken with the establishment of asymptotic freedom for the gauge theory of strong interactions. By 1980 the Standard Model of Weak, em and strong interactions was settled; the Higgs sector of that model remains still to be tested, which hopefully will be done at least partially using the new machine L(arge) H(adron) C(ollider) at CERN, now running.