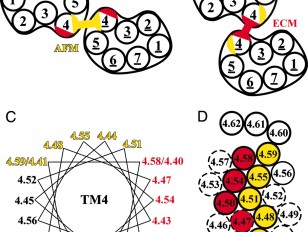 This talk concentrates on cellular regulation by tyrosine phosphorylation which has been directly implicated in cell growth, differentiation and transformation. Growth factor receptors transduce their signal by recruiting a multiplicity of adaptor proteins interacting with one another in a tinker-toy sort of way through a plethora of binding modules (SH2, SH3, WW, PH, PTB, PDZ, etc.) thereby initiating a diversity of signaling cascades. A few examples as to how the modules are utilized will be presented. Regulation of signal transduction also involves protein tyrosine phosphatases (PTPs), an expanding family of transmembrane and intracellular enzymes that catalyze the reverse reaction. Most receptor forms have a modular architecture with highly variable external domains often containing immunoglobulin-like and/or fibronectin type III repeats. Surprisingly, they display all the structural characteristics of cell adhesion molecules which suggests that they must be involved in -or be regulated by- cell-cell or cell-matrix interaction with the exciting possibility that they might be directly implicated in contact inhibition which plays such a crucial role in carcinogenesis.

Chemistry: the Key to Our Future
Lectures
768 views