Partnerships, Puzzles and Paradigms – A collaborative approach to cholesterol

View Partnerships, Puzzles and Paradigms – A collaborative approach to cholesterol 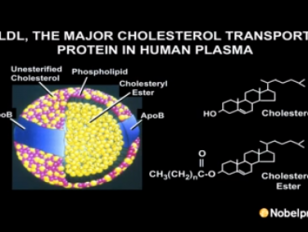 Dr Michael Brown and his long-time colleague, Dr Joseph L. Goldstein, together discovered the low-density lipoprotein (LDL) receptor, which controls the level of cholesterol in blood and in cells. They showed that mutations in this receptor cause familial hypercholesterolemia, a disorder that leads to premature heart attacks in one out of every 500 people in most populations. They have received many awards for this work, including the US National Medal of Science and the 1985 Nobel Prize for Medicine or Physiology. This lecture was delivered during a visit to Philadelphia as part of the Nobel Prize Inspiration Initiative.

Photography as it Used to be
Lectures
1196 views

The End of Disease
Lectures
1064 views

What Can We Do with Laser Frequency Combs?
Lectures
903 views