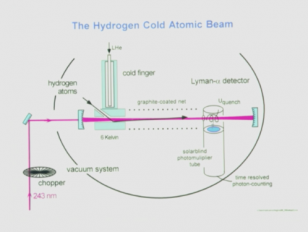 The simple Balmer spectrum of atomic hydrogen has provided the Rosetta stone for deciphering the strange laws of quantum physics during the early 20th century.  Four decades ago, Doppler-free laser spectroscopy opened a new chapter in the exploration of hydrogen. Today, spectroscopy of the 1S-2S two-photon transition in atomic hydrogen has reached a precision of 15 decimal digits with the help of new spectroscopic tools including the laser frequency comb technique.  However, the determination of fundamental constants and experimental tests of fundamental physics laws are now hindered by our insufficient knowledge of the rms charge radius of the proton.  A recent laser measurement of the 2S-2P Lamb shift in muonic hydrogen has yielded a proton charge radius which strongly disagrees with the CODATA accepted value.  In the light of these discrepant results, plans for ever-higher frequency accuracy in spectroscopic measurements of the hydrogen atom have gained much in relevance.  Precise spectroscopy of transitions between higher-lying states will provide a path to determine an independent value of the rms charge radius of the proton.  In the near future, the measurement of the 1S-2S transition frequency may reach a precision of 16 decimal digits, with direct remote referencing of our experiments to the atomic clocks of the German national metrology institute PTB through a 920-km-length optical fiber link.  Future advances might permit a redefinition of the second in terms of the simple hydrogen atom.  Envisioned precision spectroscopy of antihydrogen may reveal conceivable differences between matter and antimatter.

What Can We Do with Laser Frequency Combs?
Lectures
987 views

Towards a Quantum Laboratory on a Chip
Lectures
702 views

What Can We Do with Laser Frequency Combs?
Lectures
987 views