Forging a Genetic Paradigm for Cancer 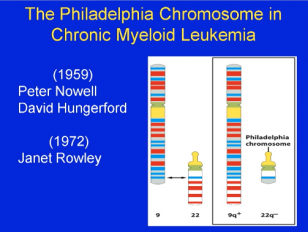 It is now axiomatic that, no matter what its causes, cancer ultimately arises from the malfunction of genes. A number of clues prefigured this paradigm: the persistence of the malignant phenotype through countless cell divisions; the mutagenicity of various agents that can cause cancer; the presence of chromosomal abnormalities in cancer cells; the occasional instances in which cancer presents as a familial disease; and the predisposition to cancer that accompanies heritable deficiencies in DNA repair. In concert, these findings pointed to an altered genome as the underpinning of cancer. It was the study of RNA tumor viruses, however, that first fingered potentially tumorigenic culprits among the genes of normal cells: _proto-oncogenesî that can be converted to _oncogenesî by genetically dominant gain of function. A variety of genetic anomalies inflict gain of function on proto-oncogenes in human cancer, and there is persuasive evidence that these anomalies contribute to tumorigenesis. Meanwhile, hints emerged that cancer cells might also suffer from recessive deficiencies that contribute to the neoplastic phenotype. The first tangible sighting of such a deficiency came from the discovery of a focal chromosomal deletion that creates a hereditary predisposition to childhood retinoblastoma. Exploration of this deletion uncovered the first of many _tumor suppressor genes,î homozygous deficiencies of which contribute to tumorigenesis. Combinations of wayward proto-oncogenes and defective tumor suppressor genes are present in most, if not all human cancers, having accrued in a stepwise fashion to drive the clonal development and diversification that lead to malignancy – a maladaptive form of Darwinian evolution in miniature. The growing power of genomic science promises to bring us a comprehensive inventory of the genetic maladies in human cancer and the particular tumors in which each of the various maladies may be culpable. The resulting genetic fingerprints should strengthen our approach to virtually every aspect of cancer, including predisposition, cause, pathogenesis, detection, taxonomy, therapy, prognosis and prevention. The forging of the genetic paradigm for cancer provides a powerful example of the unexpected ways in which science can unveil the secrets of nature to the benefit of human health and welfare.