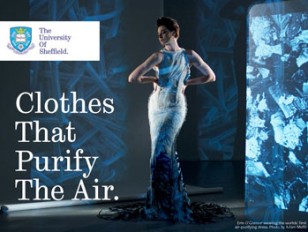 When science meets fashion exciting things happen. Unlikely collaborators designer Helen Storey MBE and scientist Tony Ryan OBE have teamed up for Catalytic Clothing – a radical project that endeavours to clean the air we breathe through the clothes we wear. The project is as awesome as it is necessary. In March, the City of London was issued with an ultimatum by the EU Air Quality Directive: cut emissions or face a fine of up to £300 million. An estimated 3,000 deaths per year are caused by dangerously high levels of PM10 (harmful particles likely to be inhaled by humans), it’s pretty clear something needs to be done.