Atmosphere Climate and Chemistry in the Anthropocene

View Atmosphere Climate and Chemistry in the Anthropocene 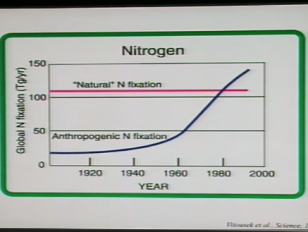 Despite their relatively small mass, 10-5% of the earth biosphere as a whole, generations of ambitious ‘homo sapiens’ have already played a major and increasing role in changing basic properties of the atmosphere and the earth’s surface. Human activities accelerated in particular over the past few hundred years, creating a new geological era, the ‘Anthropocene’, as already foreseen by Vernadsky in 1928: _ the direction in which the processes of evolution must proceed, namely towards increasing consciousness and thought, and forms having greater influence on their surroundings.” Vernadsky’s predictions are more than fulfilled. Human activities are affecting, and in many cases out-competing, natural processes, for instance causing the ‘ozone hole’, the rise of greenhouse gases with their impact on climate, urban and regional air pollution, ‘acid rain’, species extinction, with all their consequences for human and ecosystem health.

The breakdown of macro-nutrients
Lectures
1184 views

Cuckoos and their victims
Lectures
692 views