DNA between Physics and Biology

View DNA between Physics and Biology 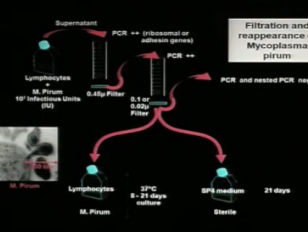 The association of DNA with water is known since the deciphering of its double helical structure by X-Ray diffraction in 1953 (Watson, Crick, Wilkins and Franklin). However the power of DNA for organizing water seems to go far beyond the direct filling of water molecules within the grooves of the double helix. Indeed, we have recently discovered that some DNA sequences – so far belonging to pathogenic bacteria and viruses – are able to induce specific structures of nanometric size in water. When sufficiently diluted in water, these structures are emitting a spectrum of electromagnetic waves of low frequencies (ranging from 1,000 to 3,000Hz). This is a resonance phenomenon which is dependent on excitation by very low frequency electromagnetic waves, usually provided by the ambient background. According to the theory of diphasic water, water dipoles can organize themselves, upon low energy input, into quantum coherent domains able to receive and keep biological information. In agreement with this model, we have recently obtained evidence that some specific DNA sequences can be transmitted through waves in water. This raises the interesting possibility that living structures are able to communicate through waves, like we, human beings, have recently started to do so for social purposes. Besides these theoretical considerations, there are already medical applications of the phenomenon: In the blood of patients suffering of chronic diseases, we can detect electromagnetic signatures of DNA from infectious microorganisms remaining in a latent state. In the case of HIV/AIDS, the DNA signature appears after antiretroviral therapy, revealing a niche of the virus resistant to this treatment._