The Origin of Elementary Particle Masses 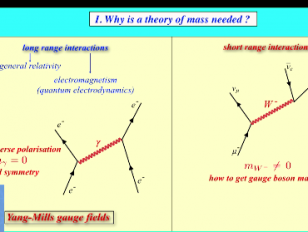 In the beginning of the 60s, the laws of classical general relativity, Einstein’s generalisation of Newtonian gravity, and of quantum electrodynamics, the quantum version of Maxwell’s electromagnetic theory, were known. These laws describe long range interactions, which act on objects no matter how far they are separated from each other. But there was no consistent theoretical interpretation of the short range fundamental interactions, acting at subatomic levels. Inspired by the success of quantum electrodynamics and by Nambu’s work on Spontaneous Symmetry Breaking, Robert Brout and I, and independently Peter Higgs, initiated a solution to the latter. It led to a theory of mass generation for elementary particles and to their Standard Model. Confirmed by the discovery at CERN of the underlying agent, the Scalar Boson, it questions the unknown, both for elementary particles and for the cosmological history of the universe.

The Matter with AntiMatter
Lectures
1191 views