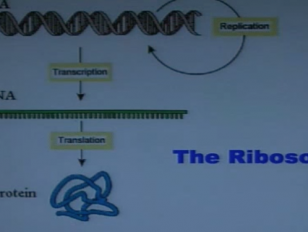 Ribosomes are the universal cellular machines that act as polymerases that translate the genetic code into proteins. They posses spectacular architecture accompanied by inherent mobility that facilitate their smooth performance in decoding, peptide bond formation and nascent protein elongation. These huge particles are composed of proteins and RNA, among which the RNA moieties perform both tasks: decoding and peptide bond formation. The site for peptide bond formation (PTC) is located within a universal symmetrical region, an outstanding feature within the otherwise asymmetric ribosome, which seems to be the remnant of a prebiotic RNA machine. Owing to its stunning design, the symmetrical region is capable of positioning both the amino acylated- and Peptidyl-tRNA substrates in stereochemistry required for peptide bond formation, for substrate-mediated catalysis, and for tRNA translocation, thus enabling the repetition of peptide bond formation. In the contemporary ribosomes this region connects all of the remote ribosomal features involved in its functions, hence may transmit signal between them. The elongated tunnel along which nascent chains progress until they emerge out of the ribosome is situated adjacent to the PTC. This tunnel provides hosts a major family of antibiotics and may be involved in chaperoning and provides the binding site of the first cellular chaperone that encounters the emerging nascent chain.

Curiosity and its Fruits: From Basic Science to Advanced Medicine
Lectures
797 views