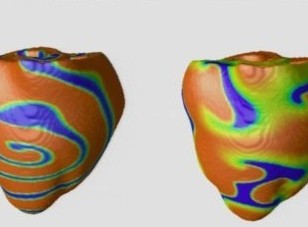 Some heart arrhythmias are produced by the presence of additional pacemakers in the heart. Those pacemakers are death tissues or scars that trap electrical waves. As an analogy, we pinned scroll waves to obstacles using the Belousov-Zhabotinsky reaction as media. These scroll waves or scroll rings are spirals rotating around a circular curve. The pinning prevents the typical collapse of the scroll ring, which one would observe in homogeneous media in the absence of an obstacle. Moreover, our results show that the rotation period of the pinned vortexes increases with increasing the cross-sectional radius of the obstacle. Preliminary results on pinning to diverse obstacles are also presented.

Building and Breeding Molecules to Spy on Cells, Tumors, and Organisms
Lectures
996 views