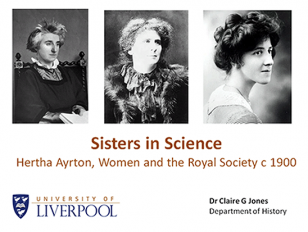 Although women were not admitted as Fellows until 1945, by the beginning of the twentieth century there were a number of female scientists working at the margins of the Royal Society and its masculine scientific elite. This talk will introduce some of these women,ÊconsiderÊthem inÊthe context of contemporary discussions about gender,ÊandÊdiscuss the bid of physicist, electrical engineer and suffragette Hertha Ayrton to become a Royal Society Fellow in 1902. Claire Jones is Teacher and Honorary Fellow in the Department of History, University of Liverpool.