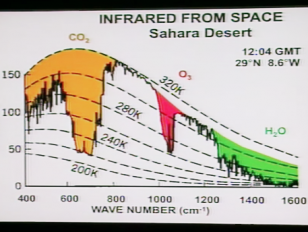 The ‘greenhouse gases (GHG)’ intercept a fraction of outgoing terrestrial infrared radiation, creating the natural greenhouse effect which warmed the atmosphere by approximately 32 Celsius at the beginning of the 20th Century. The activities of mankind have caused several of these gases to increase in atmospheric concentration during the past century, raising the atmospheric temperature by another 0.7 Celsius. Carbon dioxide, the most prominent GHG is released primarily by the burning of the ‘fossil’ fuels coal, oil and natural gas, and has increased from 315 ppmv (parts per million by volume) in 1958 to 388 ppmv in 2008. Methane increased about 1% per year in the 1980s from 1.52 ppmv, but has slowed down to a nearly constant 1.78 ppmv from 2000 to 2008. Nitrous oxide (N2O) and ground level ozone (O3) are also steadily increasing in concentrations. The increase in GHGs will warm the Earth much more during the 21st, Century unless controls on these gases are rapidly put in place. The chlorofluorocarbons (CCl2F2, CCl3F, etc.) are not only GHG contributors but also the suppliers of atomic chlorine to the upper atmosphere, causing the loss of stratospheric ozone. Every September since the mid-1980s a rapid loss of ozone occurs in a few weeks over the south polar area, resulting in the formation of the well-known Antarctic Ozone Hole, which fades away in mid-spring (November). These losses in stratospheric ozone led in 1987 to the international adoption of the Montreal Protocol which banned the further manufacture and release of the chorofluorocarbon gases. This Protocol has now been in effect for 22 years, and has been very successful. Nevertheless, the Antarctic ozone loss will occur throughout the 21st century because of the long survival lifetimes of the CFCs which have already been released. Feedback processes involving reductions in reflectance (albedo) from ice to water, or from to snow to rock cause enhanced warming in the polar north, and the climate is changing rapidly in the Arctic with substantial biological effects.