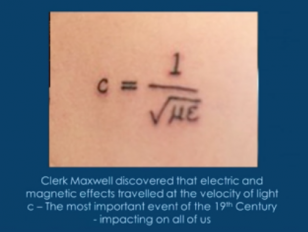 The ‘Common Sense’ that is needed to survive does not necessarily provide correct answers to the way the Universe works.  Science is actually not that old, it really only started in about the 16th Century and was a byproduct of ‘The Enlightenment’.  This lecture probes the reasons why it was not born earlier as well as the circumstances surrounding the traumatic events and brave people who were responsible for the difficult birth and its detachment from the dogma-based mystical constructs that had been accepted as ‘true’ heretofore.  Science is a direct consequence of Natural Philosophy which is the only philosophical construct we have devised to determine truth with any degree of reliability and Natural Philosophy is the bedrock of ‘Enlightened’ thinking.  Science was actually born when the ‘odd’ motions of the planets, in particular the orbit of Mars, were determined to be ellipses with the Sun at one focus and the underlying Laws of Classical Mechanics codified by Newton.  Prior to this moment humans relied on common sense and empirical observation, but had no understanding of the underlying principles which controlled the way objects, such as the Sun, planets and apples (!), moved.  We owe a great debt to Galileo, Kepler and others, such as Giordano Bruno, who was executed for fighting for the freedom to doubt and question authority based on dogma, that today there is some freedom to doubt in some countries.  These freedoms were recognised by people like Spinoza, Hume and Kant in Europe and in North America by the architects of the US Constitution: Paine, Jefferson, Madison and Franklin as fundamental planks of Democracy.  In the latter half of the 20th Century we in the West have taken these freedoms for granted but now as the 21st begins there is strong evidence that they are being eroded quickly.  Indeed it is interesting to note that only where Natural Philosophy has managed to survive and counteract dogma to some degree are both Science and Democracy significant factors in society.  The Enlightenment, and in fact the survival of the Human Race itself, are now under threat and four of the major enemies are highlighted in this presentation.

Science, the Enlightenment and the Internet
Lectures
1343 views

The Energy and Climate Change Challenges and Opportunities
Lectures
852 views