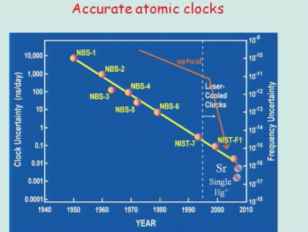 Even though this is the 51st year of the Laser, progress in its control and application in precision measurements is still accelerating.  The Optical Frequency Comb technology exploded in 1999-2000 from the synthesis of advances in independent fields of Laser Stabilization, UltraFast Lasers, and NonLinear Optical Fibers, enabling a thousand-fold advance in optical frequency measurement, and searches (in the 16th digit) for time-variation of physical “constants”.  The Comb technology enables sensitive testing of human breath for marker bio-molecules and analyzing light from remote stars for possible earth-scale planets.  Current advances in ultra-precise locking are making possible stable optical frequencies defined by length and the speed of light, as well as by locking lasers to the resonant frequency of atoms.  These two ‘clocks’ represent our current prototypes of the clocks postulated by Einstein in 1905 in formulating the theory of Special Relativity, which can now be tested into the 18th decimal in a proposed Space-based experiment now being planned by our Space-Time Asymmetry Research collaboration (STAR).

What About Redefining Time Using a Stable Laser?
Lectures
843 views