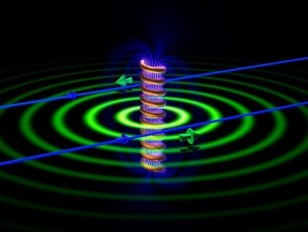 Since the time of Faraday lines of force in space have been ‘observed’ by sprinkling iron filings around magnet. The lecturer explains how, with modern techniques we can ‘see’ lines of force inside a solid magnet. The studies reveal a fascinating dynamic world in which lines of force form vortices (quantised bundles) that hop and swirl inside a superconductor (much like tornadoes do in the atmosphere). You can use a microscope to see the cell structure of a leaf. Optical microscopes employ waves of visible light. To see smaller objects such as viruses and irregularities in the atomic arrangement of crystals, however, you have to use electron waves. Why? Because wavelengths of visible light are too large to probe such small sizes. Are electrons waves? Yes, they can behave like waves, which are trains of crests and troughs just like the ripples on the surface of water. Using the electron microscope, we can see the crest height and the trough depth of the electron waves after they are disturbed from passing by the objects being examined. However, there are some objects that do not affect the height or depth of the waves, but pull back (or push forward) the crests and troughs. This can be observed by superposing two waves, one pulled back and the other unaffected, and letting them interfere. The electron waves will interfere constructively if the crests overlap, and destructively if the crests meet the troughs. This is the principle of holography, which the lecturer explains in detail during the discourse. Then, you will be able to understand the fascinating sceneries in the microcosmos that electron holography has unveiled, such as the quantised bundles of magnetic lines of force in a superconductor, and how they dance and hop!