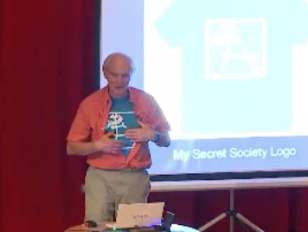 Prof. Kroto starts his lecture with remarks on his boyhood and his passions at school and University, especially graphic art and drawing.  He mentions his 4/5 rule and shows the connection between theory and experiments, and he is sold on scientific tattoos, e.g. Maxwell’s equations or Taylor series.  Experimental results are not foreseeable and so one should always do an experiment one is interested in even if one thinks that it is boring. It was the way Kroto and coworkers discovered the C60.   He discusses religious aspects, warning against doubtful ideologies and presents his favorite book.  Afterwards, he defines science from his point of view and highlights the importance of truth in science.  Another aspect is the stewardship of available resources and nature.  Sustainability is the biggest problem for young people and has to be solved for saving the planet.  Many famous scientists we very young when they created their main work, so well educated young people are needed.  In information a paradigm shift has happened, today reality is the Goo You Wiki World.  Students should work with it and create their own programs, e.g. for job application.  Scientists have great responsibilities, and most of them take them very seriously.  Kroto is appealing to all of them to create a new war-free world and to fight for more humanity.

Abstract  It might be argued that the benefits to society of Science Engineering and Technology (SET) have generally outweighed the bad contributions, as the quality of life as well as the health of people, have improved enormously – at least in the developed world.  However a massive improvement in the Political and Public Understanding of Science and Engineering etc (PPAUSE) will be necessary to realize both the future humanitarian promise of SET and/or ensure the imposition of the limitations that will safely constrain the dangers of our powerful technologies.  The interference by politicians in science teaching in schools should be recognised as presenting a serious threat to our general well-being in general and the future of the Enlightenment in particular.  In many countries education is superb – in the irrational – and abysmal in critical thinking; indeed in these countries the level of ignorance of SET is sure recipe for disaster in the future.  To combat such problems he set up the Vega Science Trust as a platform for expert scientists and engineers to communicate directly on issues that interest and/or concern them.  Vega (www.vega.org.uk) is streaming science lectures, interviews, discussions, workshops as well as careers programs – all now freely available on the Internet. 75 of the 250 programmes were broadcast by the BBC.  In addition a new, sister initiative, Global Educational Outreach for Science, Engineering and Technology (GEOSET) – has been initiated at Florida State University (US), Sheffield University (UK) and Toyo University (Japan).  It is a program that recognises the fantastic potential for shifting the paradigm of the educational process that the GooYouWiki-World (GYWW), born at the start of the 21st Century, has created.  Geoset uses a dual window format consisting of video coupled with synchronised, downloadable, supplementary data (eg powerpoint images etc).  The primary focus is the empowerment of teachers worldwide by giving them access to the very best teaching materials, packaged for their direct use in the classroom.  An unexpectedly exciting aspect has been the involvement of young students in the educational process.  Furthermore a major bonus has been the creation of a highly effective new component of student CVs which is already yielding successful results in academic awards as well as job applications.  The searchable gateway site is at www.geoset.info and the local site at www.geoset.fsu.edu.  ‘Although good decision-making cannot guaranteed by knowledge, common sense suggests that wisdom is an unlikely consequence of ignorance’.