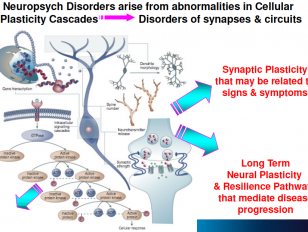 Our brain is a network of about 10^11 neurons, which are connected via synapses. A neuron typically receives input from about 10000 other neurons, which can be either excitatory or inhibitory. The neuron integrates these inputs and generates an action potential, when its membrane potential surpasses a certain threshold. In synaptic transmission neurotransmitter is released upon an increase in intracellular calcium concentration ([Ca++]) in the presynaptic terminal. Neurotransmitter diffuses across the synaptic cleft and opens ion-selective channels in the postsynaptic membrane. Synaptic strength (the size of the signal in the postsynaptic neuron, elicited by a nerve impulse in the presynaptic one) displays ‘plasticity’ – unlike signal transfer across elements in a digital computer. The term ‘synaptic plasticity’ describes the fact that connection strengths between the neurons of our brain change constantly in a use-dependent manner. These changes occur on many time scales and underlie many of the computational capabilities of our brain. Long-term changes, such as ‘long-term potentiation’ and ‘long-term depression’ are being studied intensely, since they are believed to underlie learning and memory. Short-term changes, on the other hand, are in no way less important, since they subserve basic signal processing tasks, such as adaptation, gain control, filtering, short-term memory, etc. Molecular mechanisms for this, so-called ‘short-term plasticity’, are still a matter of debate. In my laboratory we are studying the dynamics and pharmacology of short-term plasticity in a particular synapse, which has very special features for electrophysiological investigations: The ‘Calyx of Held’, a glutamatergic presynaptic terminal in the auditory pathway, is a giant synapse, which is large enough that quantitative biophysical techniques, such as voltage clamp, Ca++ fluorimetry, and Ca++ ion uncaging can be applied. Using these experimental tools, the role of Ca++ and other second messengers in neurotransmitter release can be conveniently studied (see E. Neher and T. Sakaba, 2008, Neuron 59, 861-872 for review). We identified specific roles of Ca++ in the triggering of release and in the maintenance of release during sustained high-frequency stimulation (Lipstein et al., 2013, Neuron 79. 82-96), as well as influences of other signaling pathways, which modulate amount and kinetics of short-term plasticity. A better understanding of these phenomena will not only clarify mechanisms of signal processing in dedicated brain circuits, but also provide explanations regarding the question how our brain is able to rapidly switch between distinct states, such as various forms of sleep and wakefulness.