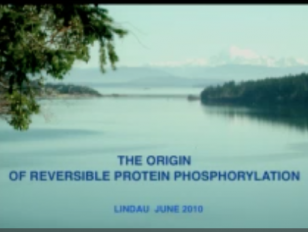 The main focus of the talk will be on signaling by tyrosine phosphorylation, which has been directly implicated in the regulation of cell growth, differentiation and transformation. External signals coming in the form of mitogenic hormones and growth factors act on transmembrane receptors that are themselves tyrosine kinases. These, in turn, transduce the signals with the help of a variety of adapter or docking proteins that interact with one another in a tinker-toy sort of way, through a diversity of binding domains, thereby initiating different signaling pathways. Some of the properties of these modules will be detailed. The src-homology 2 domain (SH2), in addition to allowing adapter or linker proteins to bind to activated receptors, can also serve as an internal conformational switch to regulate the activity of various enzymes. The PH domain recruits protein to the membrane while the PDZ domain which is usually found in multiple copies within a protein serves mainly to cluster ion-channels and receptors on the membrane, and bridge them to the cytoskeleton. Transmembrane protein tyrosine phosphatases, which catalyze the reverse reaction, also have a modular structure, often containing immunoglobulin-like and/or fibronectin type III repeats. Surprisingly and contrary to the tyrosine kinase growth factor receptors that respond mainly to circulating ligands, the tyrosine phosphatase receptors display all the hallmarks of cell adhesion molecules. This would suggest that they are involved in, or regulated by, cell-cell or cell-matrix interaction, with the exciting possibility that they might be directly implicated in contact inhibition. Tyrosine phosphatases do not act unidirectionnally. They are not merely scavenger enzymes, present only to remove the phosphate groups introduced by the kinases. Under certain circumstances, they can act synergistically with the kinases to enhance a cellular response. Some of the problems that confront us in the field of cell signaling and remain to be solved will be summarized.