Catalysis at Surfaces: From Atoms to Complexity

View Catalysis at Surfaces: From Atoms to Complexity 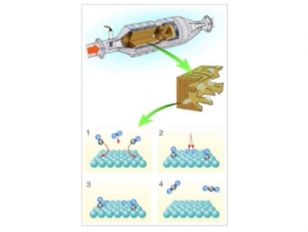 Catalysis by solid surfaces is, among others, of importance for the chemical industry (e.g. the Haber-Bosch process) as well as for environmental chemistry (car exhaust catalyst).  Surface physical techniques enable investigation of the underlying elementary processes on atomic scale, as will be exemplified mainly by carbon monoxide oxidation.  Under certain steady-state conditions such an open system may exhibit characteristic phenomena of complexity such as the formation of spatio-temporal concentration patterns which may be considered as models for self-organisation in various other areas of nature.

From Atoms to Complexity: Reactions at Surfaces
Lectures
804 views

From Disorder to Order
Lectures
602 views