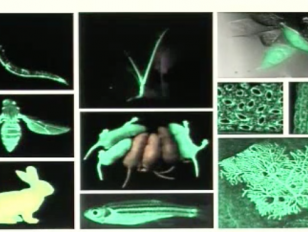 Professor Martin Chalfie regrets the disproportionately high funding of translational research, defined as applied research for the treatment of human diseases.  With examples from the research in his lab he wants to show how important nontranslational (basic) research can be.  Chalfie’s main interest are mechanical senses, he worked on that with the nematode Caenorhabditis elegans and identified several genes involved in touch sensibility. Green fluorescent protein (GFP) proved to be an ideal marker to look for gene expression in the transparent C. elegans and find mutants.  Chalfie discovered that for the production of GFP just the DNA encoding for GFP has to be added to the cells without any additional component.  This non-invasive technique allows to study dynamic processes in living organisms.  GFP bound to specific other proteins can be used as a marker to watch different processes within the cells. Examples are given in two films: 1.GFP attached to a protein of the mitotic spindle allows to see the synchronous building of the spindle. 2.GFP attached to a protein of the cell nucleus shows the breaking down of the nuclei in a not synchronous process.  Today, GFP is used by many scientists working on different topics as a tool to visualize molecular processes.  With this technique Chalfie was able to identify the first eukaryotic transduction molecule for touch.  Chalfie points out that there is no specific way to scientific success, the most important thing for scientists is being committed.  Progress in science is a cumulative process with many people involved.  Basic research drives innovation leading finally to translational research and to advances in culture and industry.

Abstract.  For at least the last ten years university administrators, governmental officials, and clinical researchers have increasingly called for a greater emphasis on “translational research” (research that translates findings in the laboratory into new treatments for medical conditions) over basic research in the biological sciences.  Although the application of biological research to human disease (as well as toward improvements in agriculture and industry) is important, I feel that an increased emphasis is not needed and is actually detrimental.  Ultimately, this emphasis is self-defeating because one needs the fruits of basic research to fuel these applications.  I will give examples from my own research developing green fluorescent protein (GFP) as a biological marker and uncovering the molecular basis of the sense of touch to argue that basic research into fundamental problems in biology is important for its own sake and, not surprisingly, for the development of various applications.

GFP and After
Lectures
1143 views